When you only have thirty minutes to spend at the gym, you want to be efficient. But is it possible to get in a good workout in such a short time? Absolutely! You just have to choose your exercises wisely. The key is to choose EXERCISES THAT INVOLVE AS MANY MUSCLE GROUPS AS POSSIBLE. The five exercises below done correctly will not only build muscle that make you firm and improve your metabolism, but they will get your heart rate up because of the simple fact they involve so many muscle groups! In addition, all these exercises are functional, meaning, you don’t just train individual muscles but movements. The body is designed to balance, stand, move, walk, run, accelerate, decelerate and stop, twist and turn, flex and extend, rotate, change levels as in lunging, push/pull objects as in reaching, hop and jump, and climb. This is why you want to stay away from doing exercises stuck in a machine as much as possible, especially not machines in which you have to sit.

Do fifteen to twenty reps of each exercise one after the other. When you’ve completed all five, do all of them again two more times. 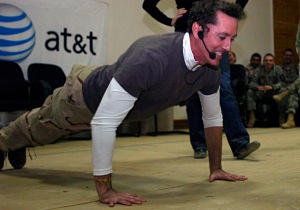 1. The Pushup. This guy has perfect form: His butt is neither sagging to the floor nor sticking up to the ceiling, and his neck is neutral, meaning, his head isn’t sagging. It’s great to strengthen chest, arms, shoulders and core.

2. The Row, great back and bicep exercise. The women in this photo are doing standing TRX rows. You can do standing rows with a lat pull down bar or cables. Avoid seated row machine. If you have to use one, don’t hook your legs under the pad and instead use your core to braise as you pull.

3. The Squat to Overhead Press. Instead of holding onto balls like these guys, grab two heavy weights and place them on your shoulders as you squat down. As you stand back up, press the weights over your head. Squat back down again, weight on your shoulders. This exercise works all of your legs as well as your shoulders and core.

4. Jackknife abs. The girl on the photo at the top of this article is doing a jackknife exercise with a twist at the top, hands behind her head instead of stretched out over her head. A traditional jackknife would be done with straight legs and you touching your toes at the top off each rep. Then you return to the starting position—lying down supine on the floor, arms stretched out above your head. Imagine a jackknife closing and opening.

5. Wood Chops. Because the wood chop—a phenomenal core exercise—is such a complicated exercise, I suggest you look at this excellent video to learn how to do it correctly. As you’ll see, this exercise works both upper and lower body. Good luck!

All my blog posts